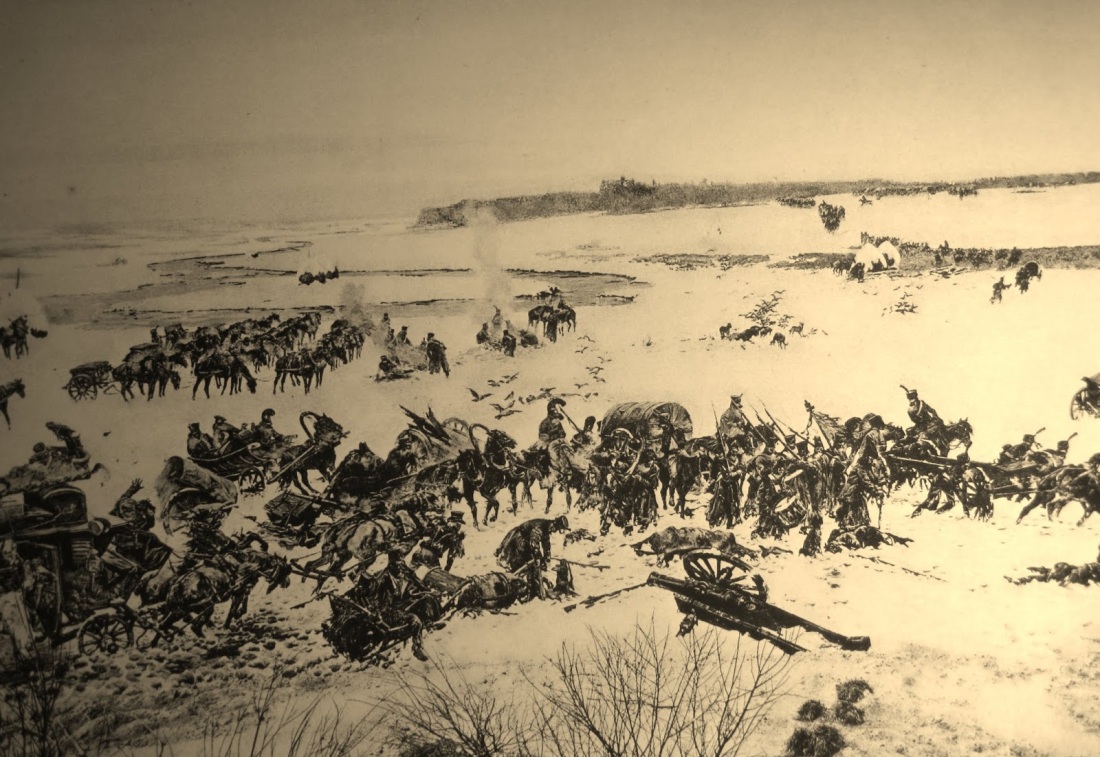 The Berezina, by Wojciech Kossak and Julian Falat

The curtain rises to reveal a line of soldiers standing at attention.

Carlo: Cossacks got him, capitaine

Mateo: Fell into the Berezina, monsieur

Capt. Moureaux: Only four dead then? Not so bad. We may yet make it out of this damned country with a quarter of our strength! Anyway, that’s all for today. Get some rest, it’ll be a long march tomorrow and the weather isn’t likely to improve.

Moureaux walks briskly off stage, the soldiers relax into a more comfortable posture, and, putting down their weapons, sit around a campfire.

Carlo: Should have only been three, but a general can’t be troubled to share his carriage with an exhausted private.

Mateo: Yes, it’s a shame what happened to Sánchez. Left alone to freeze like that. But that’s war for you.

Carlo: Yes, that’s war… (his voice trailing off, he looks back down at the fire)

After a few moments pause, Mateo speaks up, looking at one of the other soldiers

Mateo: Simón, Sánchez was from Valladolid like you are, right?

Simón: Yes, he was. I didn’t know him before the war though.

Mateo: What’s it like in Valladolid this time of year?

Simón: Cold, but not near as cold as here. Everyone’s minds are on Christmas and the holidays, and it lifts people up, that feeling of shared anticipation. At least that’s how it was before the French came.

Mateo: Reminds me of Madrid.

Pietro: And me of Milan.

Carlo: Best not to think of home, Pietro. I doubt we’ll see our city again.

Giuseppe: Oh, don’t be so gloomy Carlo! The Emperor has won a hundred battles, he’ll get us through this yet.

Carlo: He won at Berezina, but Rossi will never lay eyes upon the olive groves of Tuscany again.

Giuseppe: Aye, it was a cursed thing, dying in a frozen river so far from home. But some always die in battles, that can’t be helped. The Emperor’s a genius, and if anyone can get us home, it’s him.

Carlo: His genius may have won him an Empire, but all it ever got Amabile was a cossack’s lance through his stomach.

Giuseppe: Ah, you know you really do have a talent for darkening the mood, Carlo. I’m off to bed before you get us all shot with this defeatist talk.

Carlo: (muttering) How can one talk of defeatism amongst the defeated? The Emperor may win or lose, but we’ll all be beaten just the same.

Mateo: Do you really think that its so hopeless? We aren’t so far from Poland now.

Carlo: Hope? (raising his head abruptly and speaking in a clear voice) Do you remember what it was like before the French came?

Mateo: Well, times were hard. My father was an artisan, and the English blockade made it hard for us to get by. Still, there was a sort of dignity in it for him, working on his own behalf without having to bow to any master or gentleman. But when the French came his workshop was shut down.

Carlo: I’m too young to remember a time before the French, but my father told me of when they first arrived. Bonaparte rode into Milan, and the French planted a liberty tree to celebrate the foundation of our new republic. All the people of the city came to watch it. They thought they would be free at last, that we wouldn’t have to bow to kings or tyrants anymore.

Mateo: And now you’re here, in the army of the Emperor.

Carlo: And now we’re here. And the kings are still on their thrones in Milan and Madrid, while liberty’s tree wilts in their gardens. So, do I think we will make it back to Poland? We may well be in Warsaw in a few weeks’ time. But do I have hope? Would life in Warsaw, or even life in Milan, be so different from life here?

Mateo: At least there could be life in Warsaw, here there’s naught but death. And in life there’s hope that one day we’ll see a world worth living in.

Carlo: But we are soldiers, and for us life means we either die or we kill. That’s no choice at all. And if I can’t even choose my own fate, I certainly can’t bring myself to hope.

Mateo: You won’t find hope thinking about yourself. We know ourselves all too well, and we can never help but feel that our conditions or our actions fall short of whatever standard of goodness or justness that we have envisioned in our minds. Think of home, think of your friends, and you’ll begin to feel what you can’t feel for yourself, love. Then, perhaps, you’ll find some hope.

Carlo: I see the truth in what you say. But I cannot help but feel that the Russians who we killed at Borodino felt the same way, that they had the same love for their homes and friends as we do. And for that reason, I cannot permit myself the luxury of such happy remembrances.

Mateo looks as if he is about to respond, but is interrupted by Captain Moureaux as he enters

Cpt. Moureaux: Carlo and Mateo, still up I see? What are you philosophizing about tonight?

Cpt. Moureaux: Ah, what a beautiful thing to think about. How I do miss Marseilles at this time of year, when winter finally gives us some respite from the Mediterranean heat. Thinking about it now, it’s almost as if I can see it, the young couples out on promenade and the old ones lining up at the theater. Tell me, Mateo, what do you think it’s like in Madrid around this hour?

Mateo: Well, capitaine, I imagine there in bed, considering the curfew that King Bonaparte decreed.

Capt. Moureaux: (visibly uncomfortable) Ah, yes, I suppose so. Well that reminds me, we all ought to head to bed ourselves, it’ll be a long march tomorrow and I don’t want anyone falling behind!

Capt. Moureaux: Good night Mateo. And good night to you too Carlo.

Captain Moureaux exits, as Mateo and Carlo stand up

Carlo: If only we had beds to go to.

The next scene will be published here on the 2nd of December, 2020.