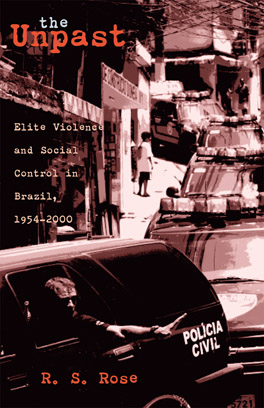 Generally, it is assumed that terror can only be practiced on a mass scale by states. R. S. Rose, in his book The Unpast: Elite Violence and Social Control in Brazil, argues that it is not only governments that commit acts of mass terror, but also elites seeking to maintain their social positions and to exercise control over the lower classes. This focus on elite violence moves the discussion away from how states abuse their authority through torture and terror, to how any group with a hierarchal relationship to a lower group can abuse that authority, and indeed, that that abuse is an inevitable aspect of hierarchy in the first place. In doing so, Rose offers compelling explanations of the seeming persistence of terroristic practices in Brazil despite changes in governmental form, and of why the burden of terror seems to always fall hardest upon the poor.

S. Rose’s primary thesis is that the domination of one class by another is a violent act, and while that domination is generally maintained through law, ultimately it requires violence in the form of terror and torture to uphold – acts that are viewed as criminal in the very laws developed by elites to control the lower classes (Rose 10). Three primary conclusions can be drawn from this idea. First, that terror and torture are caused by elite attempts to maintain their social status, and thus are not only the tools of dictatorial governments, but also the tools of democratic governments that remain dominated by traditional elites. Second, that terror and torture are not only carried out by government officials, but also by organizations controlled or led by elites that act independently of governmental authority. Finally, the acts carried out by governments and elites are in conflict with the very laws they have developed. Considering the extreme urban-rural divide in Brazilian society, analysis of these themes must include both the urban and rural contexts independently.

As to the first point, in urban areas, the period after Goulart’s overthrow witnessed only an increase in extralegal police and military torture, not its onset. Soon after the coup, General and now President Castelo Branco began the process of consolidating the regimes hold on power, and by November 1966, every police station within the state of Guanabara (which contained Rio de Janeiro), had its own torture room (Rose 104). The following example illustrates how police torture operation typically operated – “In… a working-class municipality, north of Rio, a policeman had a relative whose store was losing several cans…of goods a night due to theft… the lawman turned [to informants] … within 30 minutes a suspect was produced. The individual was vigorously questioned, but refused to confess. So the constable in charge… broke his legs and a number of his ribs. But still the man would not confess… beaten into a coma, he was thrown into a humid cell.” Later, the informants returned and informed the police that they had had the wrong man (Rose 104).  Note that the police are operating in a working-class neighborhood, and further, how the police are acting at the request of a local business owner, establishing the class-based nature of the violence – it was aimed at controlling the lower classes, and protecting the propertied classes. It is furthermore important to note that these practices, despite their illegality, are not solely the product of the military dictatorship, but rather had their roots in the police practices of the authoritarian, but elected, President Getúlio Vargas in the 1930s. Furthermore, the practice of maintaining torture rooms in police stations has persisted even after the restoration of democracy (Rose 101; 107). While the form of government had changed, the class system had not, and the elites still needed to exercise social control, and torture was simply another tool to maintain that control. Thus, we see that across the dictatorship and after the democratic restoration, torture was used by Brazilian elites to maintain their social status, and therefore, the domination of one class by another was maintained by crime.

However, terror in Brazil was not only carried out by the government. Indeed, Rose points out that the state terror associated with the military dictatorship was increasingly unpopular as it impacted the middle classes to a far greater degree than it had previously (Rose 199). As a result, government ministers and elites in both the military and restored democratic governments increasingly had to find more covert ways of dealing with opposition. This led to the formation of the first death squads in the Americas during the middle and late 1960s, at times with the support of the military government, and at times without its knowledge, to target the enemies of the government (Rose 246-9). These groups were not official, but they often had some form of a connection with the police (Rose 296). Torture and terror in Brazil were thus not only carried out by the state directly, but also through private organizations that shared similar goals and prejudices with the military government. The violence has always taken on a class tenor. During both the dictatorship, and continuing after the democratic restoration, victims of the death squads in the cities of São Paulo and Rio de Janeiro have been overwhelmingly from working class backgrounds (Rose 280). Furthermore, the victims’ bodies were generally found in working class regions of the cities (Rose 290-1). Death squads were primarily targeting the lower classes, attempting to sow fear and demoralization amongst them. Therefore, the violence of these illegal death squads was ultimately just another component of elite efforts to assert their control over the lower classes.

In rural Brazil, the government continued its policies of terror. When a small number of Maoists entered the region of Araguaia, the government responded by flooding the region with twenty-six thousand troops. The Maoists, at their peak, numbered no more than sixty, but had gained the support of some of the camponê communities, and this spectre of rural revolt was the rationale behind the Brazilian government’s attacks (Rose 179). This completely disproportionate show of force by the government implies that the military intended to do more than just put down a few rebels. It was a move designed to demonstrate to the Brazilian camponês that resistance against the dictatorship was futile. The nature of the military operations in Araguaia reinforce this point. As the Brazilian army entered an area, it would take prisoner any camponês that they could find. Then they would demand free relatives of the prisoner to assist them as scouts or auxiliaries in exchange for the release of their loved ones. They could further prove their loyalty by cutting off the heads of opposition members and returning them to officers (Rose 180). By forcing the camponês to participate in the campaign, and by keeping hostages, the military was demonstrating that they had the upper hand, and any resistance by the camponês would only result in their or their family’s deaths. Further, the brutal methods and the turning of neighbor against neighbor ultimately were designed to destroy any sense of solidarity within camponê communities. And once again, the violence is primarily directed at the poorer classes. Finally, the military also carried out a brutal torture regime with the aim of gathering intelligence on the sixty guerrilla’s activities, much the same as they did in urban Brazil (Rose 180). Thus the military government used overwhelming force and torture as a means to crush any potential lower-class resistance and ensure the continued dominance of the state and the elites over rural Brazil.

Just as in urban Brazil, the restoration of democracy did not end the terror that so many camponês experienced. Long before the military dictatorship, landowners relied on jagunços and capangas, hired thugs and bodyguards, to ensure their workers stayed in line (Rose 204). However, as the military government began to collapse, the terror required a more respectable front, leading to the founding of the União Democrática Ruralista (UDR) in 1984, a conglomeration of rural elites opposed to land reform (Rose 204). The UDR, despite its theoretical repudiation of violence, often hired assassins to deal with anyone who agitated against the dominance of rural elites. Indeed, the practice was so common that specific prices were established for the killing of certain individuals, ranging from several hundred dollars for a union official, to nearly twenty-thousand dollars for a local mayor. There is no price for individual agricultural workers, as landowners could usually deal with them through their jagunços easily enough (Rose 206-208). Clearly, rural elites had developed an organized system for violently removing anyone who opposed them – a system which most certainly qualifies as terroristic. Further, the violence is directed at those who are likely to advocate on behalf of the lower classes – union leaders, clergy, local political figures.

Another form of terror in rural Brazil has been illegal since 1888 – slavery. The practice begins in the cities. A gato (recruiter), offers an unemployed Brazilian a wonderful plantation job, with great pay and benefits, and free transportation. Upon actually arriving, the new worker discovers that conditions are horrible, and he is now indebted to his employer for his transportation, and thus his wages must go to paying that debt. Further, he must rack up more debt as he can only buy goods at an overpriced company store. This new debt to his employer makes it impossible for him to leave the fazenda. If any try to escape or resist, the jagunços are always nearby (Rose 219). There may be as many as thirty-five thousand individuals in this situation in the state of São Paulo alone (Rose 222). This practice of slavery is both illegal and, while it may not traditionally be seen as such, terror. Representatives of the rural elites trick poor urban people to come to work for them, and then concocted debt and armed men hold those individuals on the plantations. The constant threat of force and pain slavery makes it terroristic in nature – and keeps tens of thousands of people living in fear and bondage. Thus, in rural Brazil just as in urban Brazil, elites do not solely rely on the government to mete out terror to keep the lower classes in line, but are significant practitioners themselves, especially after the restoration of democracy.

In the decades before and after the overthrow of João Goulart, torture and terror in Brazilian society has varied in intensity but never ended. During the dictatorship, and persisting even after the restoration of democracy. Brazilian police used torture on a mass scale, primarily targeting the poor and other enemies of the government, while death squads targeted working-class communities. Meanwhile, in rural Brazil, the military government carried out massive military operations to deal with handfuls of enemies, and land owners maintained the slave system and hired assassins and thugs to deal with any who opposed their excesses. Rose’s analysis of Brazil’s long history of terror and torture ultimately makes an important universal conclusion about the practices – that they are ultimately the products of elites attempts to maintain their social dominance against increasingly aware and rebellious lower classes. This leads to a final conclusion about the nature of democracy in western society – as long as government, whether democratic or not, exists only to serve the privileged in society, then that society will always have its basis in terror.