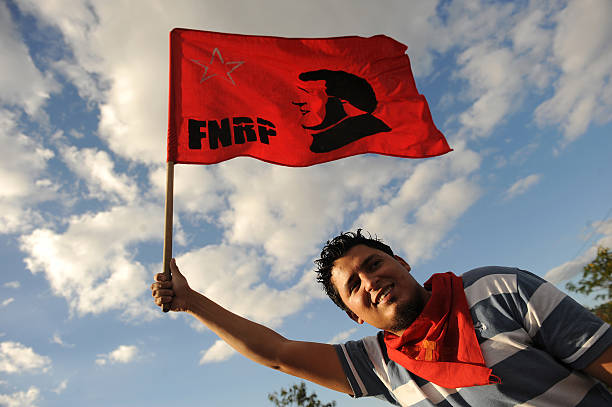 With the recent spike in deportations, the Trump administration’s increasingly hostile rhetoric towards immigrants, particularly those from Central America, and the recent crisis over separations of families, the Democratic Party and its adherents have generally adopted a uniform line: “refugees welcome.” While this is, of course, a far more humane policy than that advocated by the Trump administration, it has a fundamental flaw. It fails to address in any meaningful way how the policies of preceding US administrations (both Republican and Democratic) have forced people to flee their homes to the United States. The most obvious case of this is in Honduras.

Honduras is, in the words of Father Ismael Moreno, an “etcetera country,” one of those Central American countries considered so unimportant by US media and politics that it is often lumped with its neighbors as just another country sending immigrants northwards.[1] Indeed, Hondurans made up the majority of the recent migrant train that caused a serious controversy in our politics. Most media coverage and public debate on this issue has focused on how gang violence, crime, and poverty have forced Hondurans to flee their country. Occasionally the role the Trump administration has played in deepening the nation’s present political crisis is mentioned.[2] Unfortunately, political discourse in the US has largely ignored that Honduras has been the victim of the most significant US intervention into the politics of a Central American nation since the Cold War.

In the early hours of June 28th, 2009, members of the Honduran military broke into the home of democratically elected President Manuel Zelaya and forced him on a plane to Costa Rica. This military coup, ostensibly about a dispute over potential constitutional reform, had deeper roots in Honduran society. Honduras suffers from some of the highest poverty and inequality levels in Latin America. Further, its northern Bajo Aguán region has seen a long running and often violent conflict between large agribusinesses and farmers who argue that the companies have defrauded them of their land. During his presidency, Zelaya had sought to increase the minimum wage, and to mediate the land disputes in the Bajo Aguán, among other efforts to improve the status of the nation’s working class. He also led the country into the left-wing regional integrationist organization, The Bolivarian Alliance for the Peoples of Our America.[3] Despite the moderate nature of these reforms, Zelaya’s leftward turn awoke the significant ire of Honduras’s traditional elite, ultimately resulting in the 2009 coup d’état.

While the Obama administration condemned the coup verbally, it maintained policies that benefited the coup’s leaders. Obama was careful to avoid using the word military coup, allowing his administration to legally continue military and police aid to Honduras – aid that was promptly used to repress protesters and Zelaya’s supporters.[4] Military aid to Honduras continued throughout the rest of the Obama administration, even as the Honduran government and military were accused of conspiring to kill indigenous and land rights activists such as Berta Caceres.[5] Hillary Clinton’s state department’s response to the coup was even more questionable, as it equivocated over whether or not a coup had actually occurred, and seemingly prioritized ensuring order and continued US military presence in the country above all else.[6] It should be noted that the latter is entirely illegal, as the Honduran constitution prohibits permanent foreign military presence within the country, and thus the mission has only been allowed to remain due to the agreement of the coup government, and US classification of the mission as a “temporary deployment for an indefinite period.”[7] Ultimately, Zelaya, just like Jacobo Árbenz a half-century before, was just another Central American leftist getting in the way of the US’s larger strategic plan for the Americas.

Though the coup initially met strong resistance, in the end the government was able to retain power through repression and brute force. Yet, a cloud of illegitimacy has hung over the government, amid continuing violence against activists and the opposition, and concerns over the legitimacy of the three elections held since the coup. The November 2017 election was so controversial that it caused the Honduran people’s indignation to boil over, precipitating the present crisis.

The 2017 Honduran presidential election pitted the incumbent Juan Hernández of the right-wing National Party, against opposition challenger Salvador Nasralla, candidate of the Alliance Against the Dictatorship, a coalition of several parties including Zelaya’s socialist Libre party. From the start the election was questionable. The Honduran constitution explicitly prohibits reelection, however the Supreme Court unilaterally declared it legal in 2015. However, as initial reports of the election results came in, it looked like the opposition was poised to triumph. Suddenly, the computer system for results tabulation purportedly crashed, and when it came back online two days later, Hernández was in the lead. Hondurans flooded the streets and built barricades, and some segments of the police even attempted a revolt. However, Hernández was declared the winner, and the Trump administration recognized him, registering no complaints about the process, and keeping the military aid money flowing.[8] More than thirty Hondurans were killed, and government repression, often carried out by US trained forces, continues to this day.[9]

It is entirely understandable then that so many Hondurans have had to flee their nation to the United States. These refugees should be welcomed. At the same time, it is also important to combat the policies our government has maintained that have helped turn Honduras into a violent dictatorship. At present, the “Berta Caceres Human Rights in Honduras Act,” which would end military and police aid to Honduras, is being considered by Congress. As a show of solidarity to our sister republic, we, as the American people, must support this bill.

Honduras is more than an “etcetera country.” It’s national hero, Francisco Morazán tirelessly fought to preserve the 1830s union of Central American States, and to build a more democratic and egalitarian society. He also was a staunch opponent of foreign intervention in the fledgling Central American republics’ affairs. Today, his face is a common sight among the protest signs of Hondurans, and his name is often invoked in the continued struggle for a new Honduras. The people of the United States could do well to learn from the democratic examples of Morazán and the Honduran people, and fight against the policies of our government that have helped bring so much misery to Honduras.

[9] Cuffe, Sandra. “U.S.-TRAINED POLICE ARE HUNTING DOWN AND ARRESTING PROTESTERS AMID POST-ELECTION CRISIS IN HONDURAS.” The Intercept, February 20, 2018, https://theintercept.com/2018/02/20/honduras-election-protest-tigres/.

2 thoughts on “Honduras, Immigration, and Intervention”