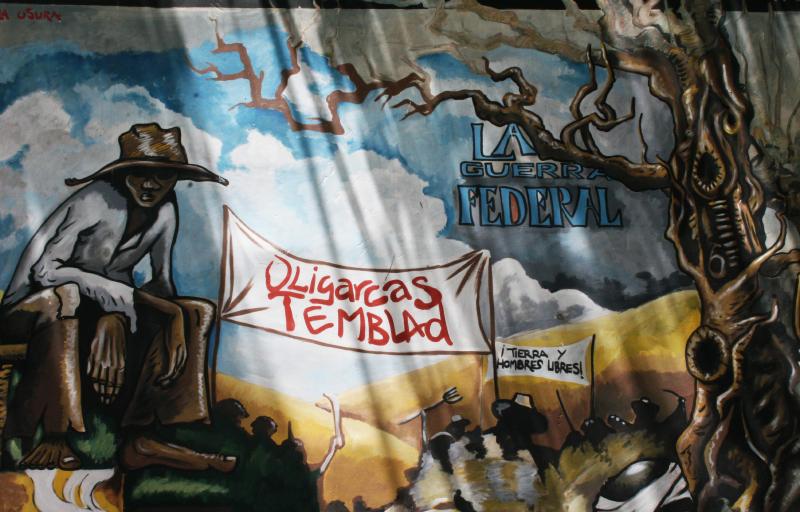 Translated by Duncan Riley and RGA

We at Adelante are happy to present what seems to be the first published English translation of the “Manifiesto Inicial de la Federación,” a speech that signaled the beginning of the Venezuelan Federal War (1859-63).

Initial Manifesto of the Federation

The revolution of March has been wickedly falsified. Attracted by the charms of their fascinating program, all the Venezuelans came to consummate it, and their triumph has not produced other gains than the enthronement of a minority, which is always regressive, always impotent in its fall, and always eager to satisfy its ignoble vengeances. They accepted it in good faith, the same people who, faithful to their commitments, held unto recently abolished power, and with criminal violation of the protests against their throwing what happened into oblivion, they are persecuted without cause, and without formula of judgement they are condemned to indefinite proscription, without sufficiency in giving truces to this abuse, the voice of the nation that, from all angles, will rise reclaiming amnesty.

They proclaimed liberty in the elections, and never have the elections been verified more to the expense of the liberty of the people. Invoked in the same election as the most secure guarantee of popular sovereignty, was the universal vote and we have seen there has been a mockery of the universal vote, to give out this right to the armed forces, submitted to the will of bosses established ad hoc, to fulfill the proditory designs of a dominating club.

Below that depressive tutelage the elections for the National Convention took place. And what was to be the result? Again, the centralization of power against the publicly manifested desires of the peoples, again, to leave the luck of the country subject to one man and the will of his party, again, the wide countryside to perpetuate themselves in public power, with a travesty in place of the principles praised in this same central charter.

At last, the consequent abuses of such a gruesome order of things; at last the scandalous infidelities of the provisional Chief of State, who has so many times perjured himself under the religion of Oath has protested unattachment, abnegation and patriotism; at last the injustices and arbitrary matters of their agents in the provinces, always guaranteed with impunity, have exceeded the cup of our indignation and broken the dykes of suffering to realize the thinking of our hearts, and that prudence had thus far obliged us to keep in the terrain of opinion. This magical, regenerative thinking, this symbol of political faith of all Venezuelans this saving refuge, only one that the Heavens designate for us in the disordered storm that the provocative passion of desmans of an arbitrary power have loaded upon us; is the renegotiation of Venezuela in a Republic, eminently Federal.

Compatriots! My heart abounds in sentiments of jubilation that my weak voice can hardly explain. Without spilling even a single drop of blood, without humiliations or outrages of any type, with no one that can lament an injury of word or right, without more arms than your valor and without more efforts than your voices, you have accompanied me last night in the serious undertaking of seizing the weapons, with which a henchman, in imitation of the government of general Castro , was to oppress us, and with which he promises to realize the design of his master, the domination of all the country, in spite of the general will. Your feat is a memorable one, compatriots, begun with singular patriotism and valor, and with moderation, order, and morality in the middle of the tumult of a moved city, and in moments when the life and freedom of your oppressors were at your discretion! Compatriots! By the unanimous contest of your wills I have been chosen as the provisional chief for the undertaking of the holy cause of the Federation in this province; and here I am in the front of this honored movement, resolute with all the abnegation of patriotism, all the energy and ardor a of a free soul, all the noble pride of a citizen soldier beloved of his homeland, happily and calmly willing to risk chance at your side on the campaign that today opens by our efforts. I am happy, comrades, if as I hope of Divine Providence, we are to triumph over our dominators. I am happy even if I breath my last sigh in the name of liberty, the Federation, and my homeland at your side.

Men of Coro! Do not fear. The Federation is the government of all. The Federation is the government of the free, and Venezuela will obtain the laurel of the Federation. There is not a single Venezuelan, with exception of the small club that until today has dominated us, whose heart cannot beat with enthusiasm to the impulse of that enchanting voice. The whole Republic is moving. The most important towns have struck simultaneously to us, and the others prepare to support us. Opinion favors us, the armed forces are ours to excess, and most of the elements we could need are to our disposition. Men of Coro, all! Do not distrust our protests: they are not those that serve an unfaithful government, one that has been more and more unfaithful to the nation that in bad times conferred its destiny to it. Our program is solely the Federation of Venezuela, the medium of its realization is the union of all Venezuelans; and in consequence the various and odious denominations of political factions will be forever relegated to oblivion.

Long live the Federation of all the Provinces of the Republic!

Given in the general barracks of Coro, the 21st of February 1859.